Kamila Kaizlová was born in Správčice in eastern Bohemia (today part of Hradec Králové) into the family of an affluent farmer, Adolf Píša (1825–1880).1 Soon after her 20th birthday she moved with her mother Anna (née Böhm) (1829–1896) to what is now the Smetana embankment in Prague.2 Living in Prague allowed her to establish social contacts and even a romantic relationship with Professor Josef Kaizl (1854–1901), 17 years her senior, who was then active as a Young-Czech deputy in the Imperial Council in Vienna.  In the 1870s, Josef Kaizl graduated as a lawyer from the Charles-Ferdinand University in Prague, where he also started to give lectures on economics in 1879. In 1888 he was appointed full professor there, which was an important social position allowing him to consider starting a family. Kaizl and Kamila Píšová had met as early as 1889, but they got engaged only in August 1892 in Gossensaβ in Tyrol3 and eventually married in February 1893, when Josef was 38 and Kamila 21 years old. They had two daughters during their eight-year-long marriage: first-born Kamila (1895–1907) and younger Zdenka (1899–1952). Both their daughters were already born in Vienna, where the family had moved. In Vienna, Josef Kaizl managed to acquire a prominent position on the career ladder when in the spring of 1898 he was rather unexpectedly appointed as Finance Minister in the Cisleithanian government led by Franz Thun-Hohenstein (1847–1916). Kaizl held this position for only a year and half since in autumn 1899 the prime minister resigned. At that time, Josef Kaizl had less than two more years to live. After he suddenly died due to stomach ulcer complications, Kamila Kaizlová became a widow at the age of 30.4 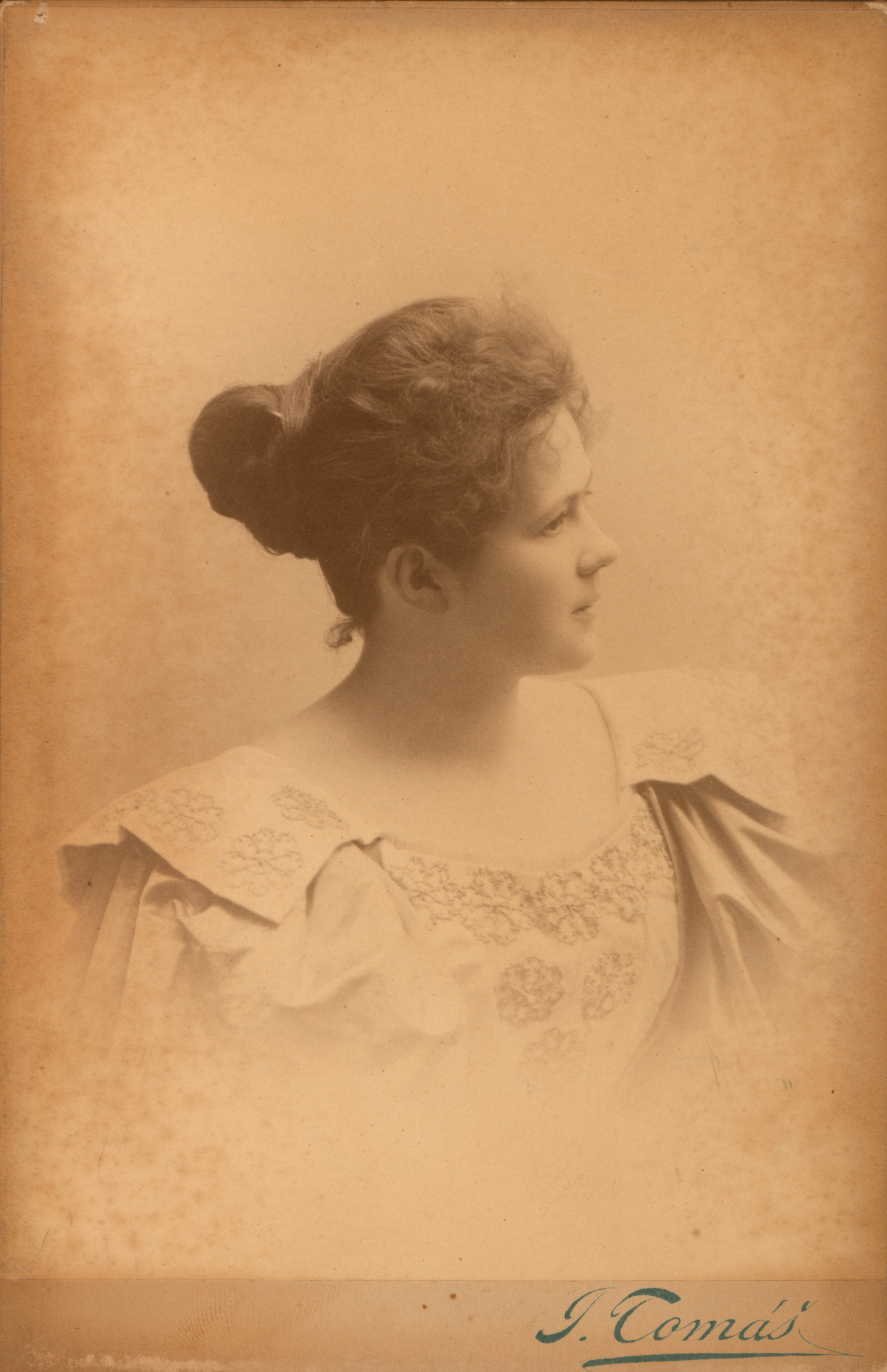 Kamila Pišová with her mother Anna Pišová in the early 1890s (Masaryk Institute and Archives of the CAS, v.v.i., fond Josef Kaizl (unarranged)). Kamila Kaizlová in a wedding dress in February 1893 (Masaryk Institute and Archives of the CAS, v.v.i., fond Josef Kaizl (unarranged)). 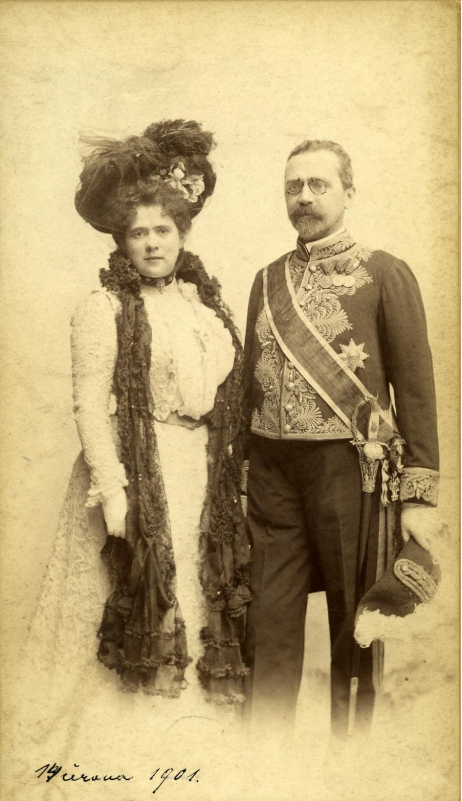 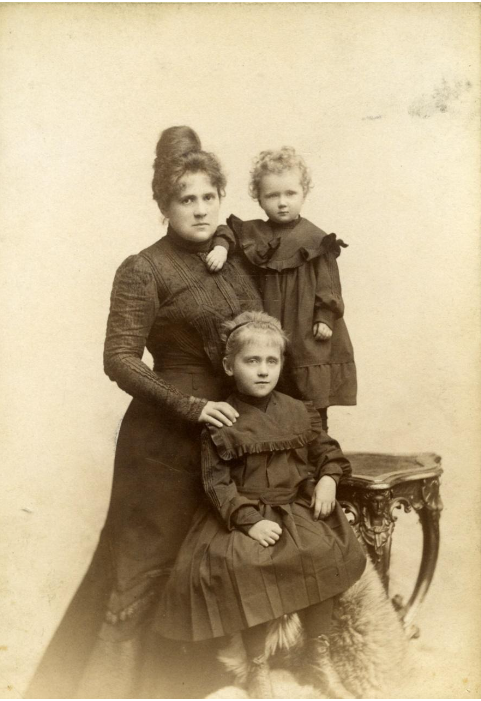 Kamila Kaizlová with her daughters after her husband's death, September 1901 (Masaryk Institute and Archives of the CAS, v.v.i., fond Josef Kaizl (unarranged)). 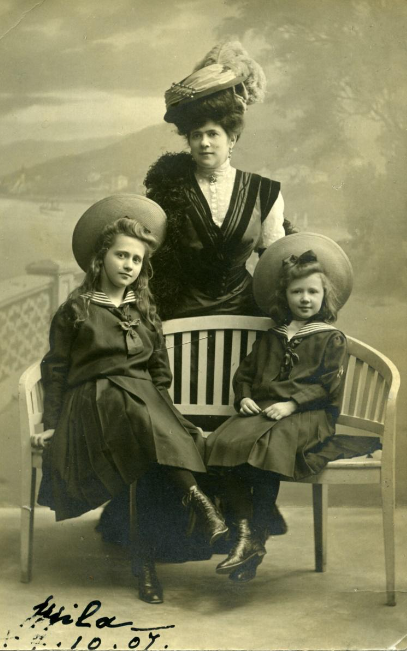 After her husband died Kamila Kaizlová moved from their apartment in the Prague Vinohrady neighbourhood back to Smetana embankment.5 The centrally located flat probably suited her better since one year after her husband’s death she took a rather unorthodox step: she started attending lectures at university. For several reasons, this decision of hers caused a minor sensation in the Prague society. There were not many women in the university lecture halls in the first place, let alone a widow of a distinguished politician looking after two young children. But a more serious reason, causing concern among many an active politician, was the alleged motivation of the ministerial widow. It was rumoured that Kamila Kaizlová was trying to improve her education so that she would be able to sort out and later publish the memoirs of her late husband. It was feared, as the Pilsner Tagblatt newspaper did not hesitate to express, that the “memoirs would contain the actual reasons behind the fall of the Count of Thun and would provide information on the intentions of Kaizl’s politics”.6 Kamila Kaizlová, the newspaper alleged, was to have obtained a special permission from the rector, enabling her to attend lectures on economics, i.e. exactly the same subject that her husband specialized in. In an interview reprinted in the Národní listy, Kaizl’s widow dismissed those speculations: “It is true that I have enrolled as an extraordinary student at the Philosophical Faculty of the Czech university; for instance last year I attended for two hours a week, this year I dedicate eleven hours a week to lectures on art, literature and history. I do not attend any societies, and therefore, this study is my occupation.” As for the publication of the memoirs, she continued: “Such conjectures are ridiculous! You have heard that I do not attend any lectures on political subjects. My husband did leave notes, but no memoirs. To publish them now would be premature since most of the persons mentioned there are still alive. It might perhaps later be possible to publish them as a contribution to recent history. It is not up to me, however, to undertake this task, since I do not have the necessary political knowledge, but up to a professional politician. I did not interfere with politics while my husband was still alive, neither will I do so now, after his death.”7 Even the Plzeňské listy denied the original information brought by the Pilsner Tagblatt.8 It was Zdeněk V. Tobolka (1874–1951) who eventually started to publish Kaizl’s diaries and correspondence in 1908.9

By coincidence, at that time Kamila Kaizlová’s name frequently appeared in articles in both Czech and German newspapers. Given that Kamila became widowed at a young age, it was to be expected that she would not live without a stable relationship forever. In 1908 she got engaged to Fedor Gyrgiewicz, 13 years her junior, lieutenant of the 13th Dragoon Regiment, allegedly an illegitimate son of the late Serbian king Milan I. Obrenovic (1854–1901).10 Accompanied by her fiancé, on Saturday 11 July 1908 Kamila attended the so-called flower parade, with horse-drawn carriages decorated with flowers passing through the streets of Prague. The parade, which attracted around thirty thousand spectators, eventually reached the exhibition area in the Royal enclosure where a tragedy occurred. The horse that was pulling the carriage driven by none other than F. Gyrgiewicz, where his fiancée was also seated, bolted. As a result, the reins got torn, the shaft broke and the whole carriage keeled over. The frightened horse threw itself onto the crowd of onlookers, causing a tragedy with one person dead and 18 gravely injured (Kamila Kaizlová herself got away unscathed). The one victim, moreover, was Jindřiška Slavínská (1843–1908), a popular former actress of the National Theatre.11 The Illustrierte Kronen Zeitung on that occasion could not suppress the fact that both the actress’s father, the writer Ludvík Ritter of Rittersberg (1809–1858), as well as her grandfather, Johann Ritter of Rittersberg (1780–1841), had died in accidents involving horses.12 During the criminal proceedings that followed F. Gyrgiewicz was eventually found not-guilty,13 but several days after the unfortunate incident he cancelled his engagement to Kamila.14

The young widow, however, did not remain alone for long. Again, she established a relationship with a man much younger than herself, Richard Preiss (1882–1967), son of the writer Gabriela Preissová (1862–1946). Richard Preiss had just freshly graduated from the Faculty od Law of the Czech Charles-Ferdinand University and worked as a trainee at the Czech Financial Prosecutor’s office.15 Their relationship eventually led to marriage, with the wedding taking place in late June 1910 in Baška on the Croatian island of Krk. However, the more than ten-year age difference between the two spouses probably resulted in a rather tumultuous relationship, and in September 1910, a mere three months after their wedding, newspapers brought the news of Kamila Preissová-Kaizlová applying for divorce “from bed and board”, which was granted by the Prague district court on 28 October 1910.16 The separation between the two spouses, however, was not yet complete since in line with the current law divorce was only the first step needed to dissolve the marriage. Even after they divorced, Richard Preiss occasionally visited Kamila, as transpires from the diaries kept by her younger daughter Zdenka.17 Sadly, not even the birth of their daughter Adriena (1914–2009), not long after World War I broke out, could bring the couple closer together. In the end, after the separation became definitive, Richard Preiss remarried, this time at a civil ceremony, taking for his wife Marie Menčíková-Trnková (1888–after 1952), who was also previously separated. But even this marriage broke up in 1932. Soon after, Richard Preiss, who at that time worked as a lawyer in Strážnice, married for the third time, taking for his wife Věra Ploskalová (1907–1995), 25 years his junior, the daughter of a citizens’ savings bank director in Hodonín. Kamila Preissová-Kaizlová did not live to see that third wedding since in April 1930 she died of chronic nephrosclerosis, making it possible for her ex-husband to have a church wedding.

Kamila Preissová-Kaizlová spent the years after divorcing her second husband in the company of her two daughters, Zdenka and Adriena – the eldest, Kamila, having died already in 1907, not yet twelve years old, of a serious pneumonia. She lived on a pension awarded to her after her first husband’s death, which she was able to keep even after she remarried. Immediately after Kaizl’s death the pension amounted to 6,000 crowns a year, with her children receiving another 1,200 crowns a year. After the birth of Czechoslovakia the amount remained unchanged, despite the war inflation, until 1928, when upon request by President Masaryk it was raised to 18,000 Czech crowns.18 However, since Kamila came from an affluent family, she was also paid interest on her own property, which, based on records from 1926, allowed her to maintain a fully equipped four-room apartment and employ a maid-servant.19

By then Kamila Preissová-Kaizlová lived only with her youngest daughter Adriena. Her daughter Zdenka moved out of the Smíchov apartment late in 1921, when she married Professor Josef Blahož (1888–1934), a consul at the Ministry of Foreign Affairs and a former officer of the Legion in Russia.20 In 1925–1931 Josef Blahož worked as counsellor at the Czechoslovak Embassy in Berlin, where the spouses maintained a lively social life and established close contact, among others, with the family of the German diplomat Ernst von Weizsäcker (1882–1951), father of the future German President, Richard von Weizsäcker (1920–2015). At one point in time, Kamila herself considered leaving for Berlin and joining her daughter’s family there.21  But in November 1921 she was hospitalized with apoplexy at a sanatorium in Santoška in Prague and spent the last months of her life worrying about the future of her fifteen-year-old daughter Adriena. At that time, Adriena stayed alternately with her father and her grandmother, Gabriela Preissová, and following their mother’s death, Zdena Blahožová also joined in taking care of her half-sister. In 1935 Adriena decided to move permanently to the USA where her father’s sister Gabriela (1892–1981) lived, married to Charles Edward Proshek (1893–1957), medical doctor and Czechoslovak consul in Minneapolis in Minnesota. Adriena never came back to Czechoslovakia.22

Even though Kamila Kaizlová spent only a lesser part of her life beside Josef Kaizl, who undoubtedly belonged among elite Czech politicians, her social position was firmly grounded in her marriage to him and she could draw from it until her last days. She maintained contacts with top Czechoslovak politicians – including Karel Kramář and T.G. Masaryk – and managed to marry her daughter Zdenka into those circles. The press called her Your Excellency and her name was usually followed by the words „widow of the Finance Minister“, even after she remarried and divorced again.

1 State regional archives in Hradec Králové, Collection of registers of the Eastern Bohemian Region, Parish of the Roman-Catholic church in Pouchov, sign. 134-7662, p. 601.

2 They lived in house No. 334 on what then was called Franz embankment (today Smetana embankment, n.334/4): National archives, Police directorate I, residence permit applications, carton 464, picture 885.

20 Before she got married she lived at what is today Nad Mlynářkou street, No 447/4. Archives of the capital city of Prague, Collection of registers, Roman-Catholic parish of St. Wenceslas in Smíchov, SM O25, fol. 3.